This year’s Tony Award nominees for best musical include, Something Rotten!, The Visit, Fun Home and An American in Paris. Who do you think will take home the Tony?

Opened at the St. James Theatre on April 22. The musical is set in London in the 1590’s and tells the story of two brothers who set out to develop the first musical amidst the competition of the “renaissance rock star” known as the Bard (William Shakespeare). The production was written by John O’Farrell and Karey Kirkpatrick and music and lyrics were created by Karey Kirkpatrick and Wayne Kirkpatrick.

Opened at the Lyceum Theatre on April 23. The musical tells the story of Claire Zachanassian, one of the richest women in the world, and her return to her deprived and financially struggling hometown. She offers the town the hope of a better life in return of the murder of the man who abandoned her several years back. The production is written by Terrence McNally with lyrics by Fred Ebb and music by John Kander. 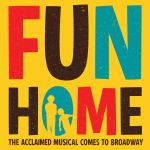 Opened at the Circle in the Square Theatre on April 19. The production tells the story of Alison Bechdel, a young lesbian, and her relationship with her father Bruce Bechdel. The audience is introduced to Alison at three different ages throughout the show. The musical was written by Lisa Kron with music by Jeanine Tesori and was adapted from the book written by Alison Bechdel.

An American in Paris

Opened at the Palace Theatre on April 12. The story revolves around an American soldier who finds romance with a young French girl in the city of Paris. The music of George and Ira Gershwin are the basis for the score of the production and the musical was written by Craig Lucas

Find out which musical will take home the top prize this Sunday when the 69th Tony Awards airs on CBS.

There was an error loading the select your own seat.